I’m sure many people have seen the recent press coverage of a young girl in Cape Town who developed a neurological condition some months after receiving the Human Papillomavirus (HPV) vaccination. It needs to be emphasized that unless further information emerges, there is absolutely no proof of a  link between the vaccine and the child’s condition. The HPV vaccine remains a safe and effective way of preventing cancer of the cervix, which is a common and devastating illness causing approximately 650 deaths daily in the world.

Along with provision of clean water and breastfeeding, vaccination is by far the most important health care advance for children in the past 100 years.

Why are vaccines important?

Remember that a mass vaccination programme is huge expense for a country like South Africa which is on a tight budget, so the government will only add a vaccine to the schedule if it makes economic sense, and the return on investment (ROI) for vaccinations (12-18%) has been shown to be even better than the ROI for education, which is quite something!

So if that’s the case…

Why are some people opposed to vaccination?

My personal view? Because people in the developed world have been allowed to forget what the world looked like before vaccinations. Have a look at the graphic below, which shows the number of cases of vaccine preventable illnesses in the USA before and after the introduction of vaccines. 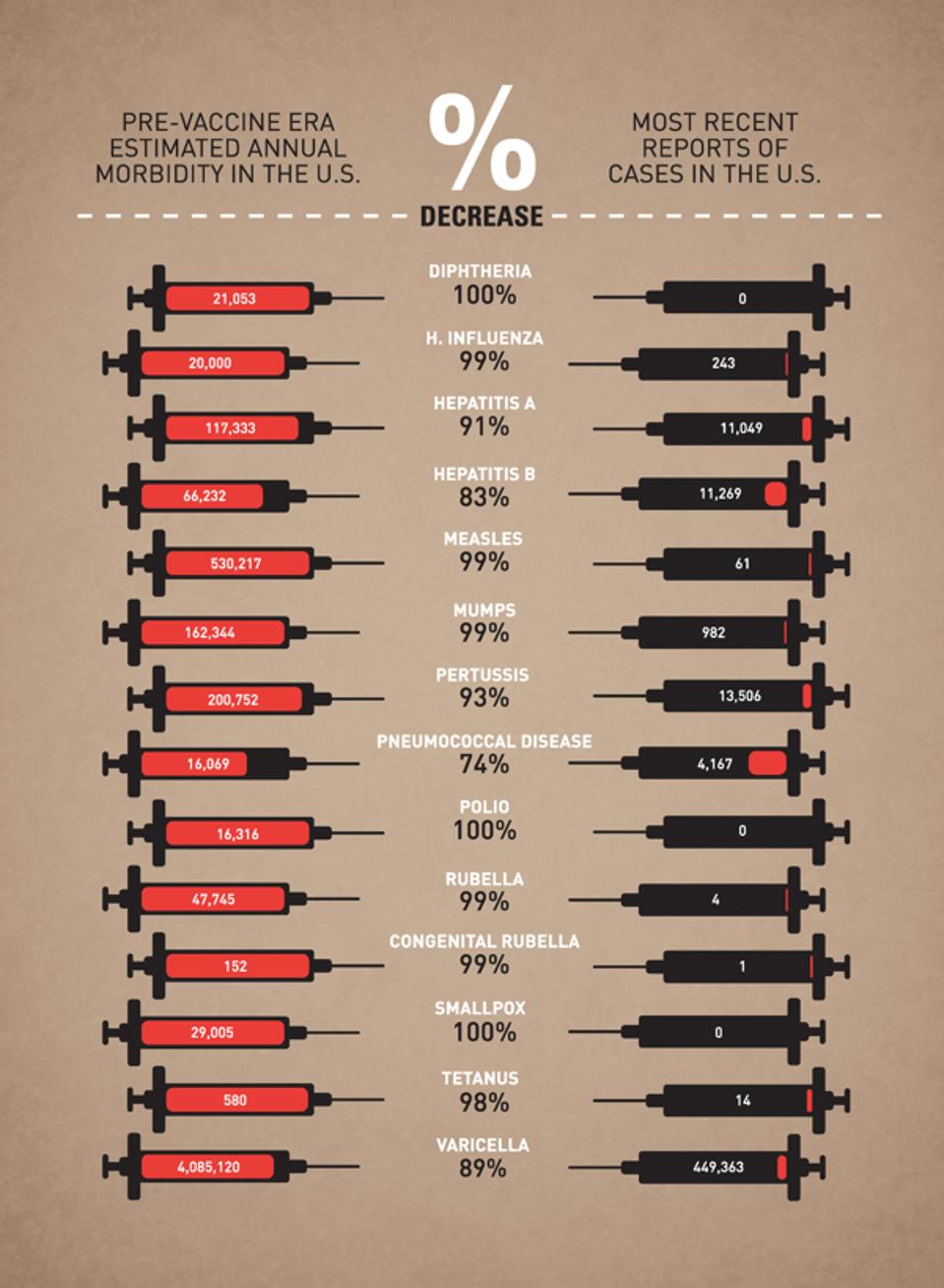 Then there’s an expectation in the developed world that we are entitled to a risk free life, and if anything goes wrong, someone is to blame. The emergence of the internet also means that any vaccine scare, real or imaginary, will spread rapidly throughout the world, as I’m sure happened with the recent incident of the HPV vaccine in Cape Town. Once again there is absolutely no proof that the vaccine had anything to do with that child’s condition, but this will not affect the negative feeling the story generates about vaccination.

So the perception is that vaccine preventable illnesses no longer exist, and therefore any real or even unproven side effect of a vaccination is unacceptable.  Is this reasonable? In other words…

Are Vaccine Preventable Illnesses still out there?

Well, yes, they most certainly are. This is shown every single time vaccine coverage (the percentage of a population which has been vaccinated) drops, either 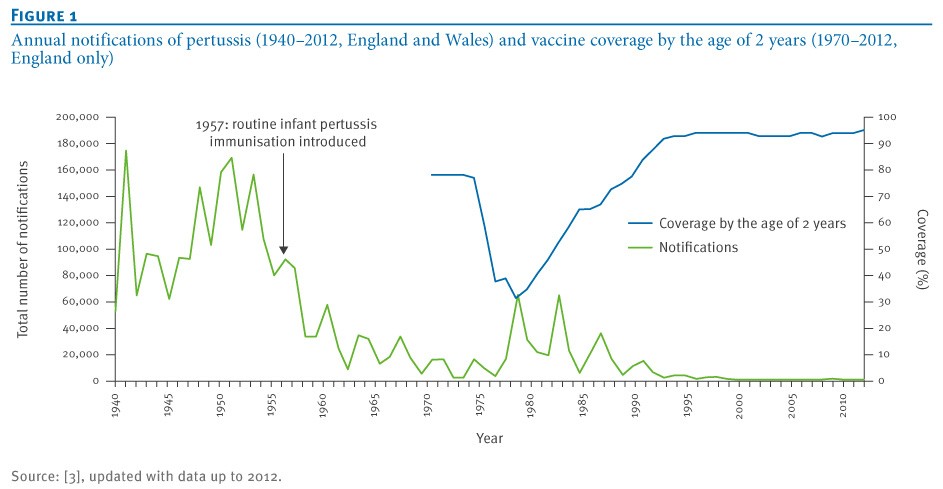 Closer to home, the outbreak of 18 431 cases of measles in 2010 saw 552 children  sick enough to be admitted to Red Cross Children’s Hospital, 18 of whom died. Worldwide, measles still causes about 134 000 deaths every year.

So the illnesses are there and we are protected from them by vaccination.

The short answer is no. Millions of children are vaccinated daily in the world, so if they were toxic, you’d know about it. The main concerns have been about

Do vaccinations cause autism?

No. Vaccines, and particularly the MMR vaccine, do not cause autism.

I can say this because large whole population studies in places like Denmark and Japan have shown no link between MMR and autism.

I can say this because the so-called evidence that MMR caused autism was false, and the doctor concerned has been struck off the medical register in the UK for publishing fake research (for which he was paid a lot of money).

As a result of the scare that this false research caused, unvaccinated children died of measles.

Are many vaccinations at the same time dangerous?

No. The body deals with large numbers of antigens (molecules from germs that make us produce protective antibodies and immunity) every day, even more when we have an illness like a cold, so no, there is generally no problem having more than one vaccine at a time. Some vaccines like the new measles vaccine (Measbio) are only registered for use on their own. The clinic sister will guide you.

So are there any dangers of vaccinations?

All vaccines can cause minor side effects like fever and irritability, usually easy to manage with paracetamol and over within a day.

More severe reactions like fever fits are very rare, not dangerous (see my blog on fever), and would need to be checked out by your doctor.

Severe allergic reactions (anaphylaxis) are extremely rare – approximately 1 case in 1.5 million vaccinations. They generally start within 15 minutes of the vaccination with itchy rash, swelling and shortness of breath and require urgent medical attention.

There are 2 very useful links from Western Australia which give more details of the side effects of different vaccines:-

Are vaccinations compulsory in South Africa?

Not at present, though some private schools may refuse entry to unvaccinated children.

Many countries have vaccination conditions for travel, and a vaccination record would certainly be a condition for immigration or a work visa.

The following link discusses the current position in Europe

I understand that there is a lot of negative information out there which is difficult for  parents to digest, so I’ve tried to provide some balance to help decision making. A few parting thoughts…

In my years as a doctor I have seen many changes. 35 years ago I witnessed the devastation of measles in the Eastern Cape which left many children dead. I have not seen a true case of measles in my last 25 years as a paediatrician.

Meningitis caused by Haemophilus and Pneumococcus was common when I started in private practice, and I have not seen a case since the introduction of the Hib and PCV vaccines 18 and 8 years ago.

And I have so far never seen a severe vaccine reaction.

Vaccines have changed the way the world looks, and have perhaps become a victim of their own success. So people have the privilege of wondering whether or not to vaccinate their children…Surely if I keep my unvaccinated child safe and away from places they may pick diseases up, they’ll be OK?

Maybe. But only if everyone else continues to vaccinate their children, exposing them to the small risks of vaccination so that my unvaccinated child can stay safe.

And only if my child stays under my roof for the rest of his/her life, and doesn’t travel in Africa, or go on exchange to Vietnam, or do relief work in Pakistan, or stay in a boarding house or university residence, because that I can’t control.

They’re only under your care for a while. Make sure they are protected against vaccine preventable diseases for the rest of their lives.